Massachusetts Senate and House leaders have filed several bills in the 2021 Session to prevent child sexual abuse in our schools, youth organizations and communities. Here are links to these bills, a summary of key provisions, and why passage must be achieved this Session. Join today with other citizens, survivors and child advocates to Pass the Prevention Package!

♦ Mandate education about child sexual abuse prevention for all schools and youth organizations;

♦ Strengthen the screening of applicants for positions in schools to identify any past sexual misconduct;

♦ Prohibit the aiding and abetting of a school employee engaged in sexual misconduct with a student to secure a position in another school;

♦ Close the age of consent loophole that has been providing legal protection for individuals engaged in sexual relations with youth 16-18 years of age;

♦ Increase penalties for educator-specific sexual misconduct and for persons in positions of authority over a child who commit child sexual abuse.

Sexual Misconduct by Educators and Persons of Authority/Age of Consent No Defense:

Actions YOU Can Take to Prevent Child Sexual Abuse 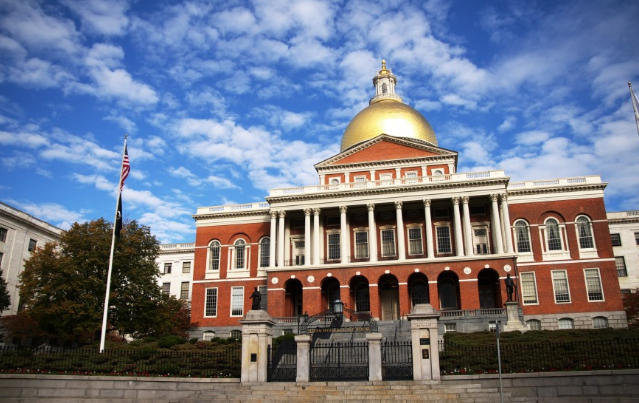 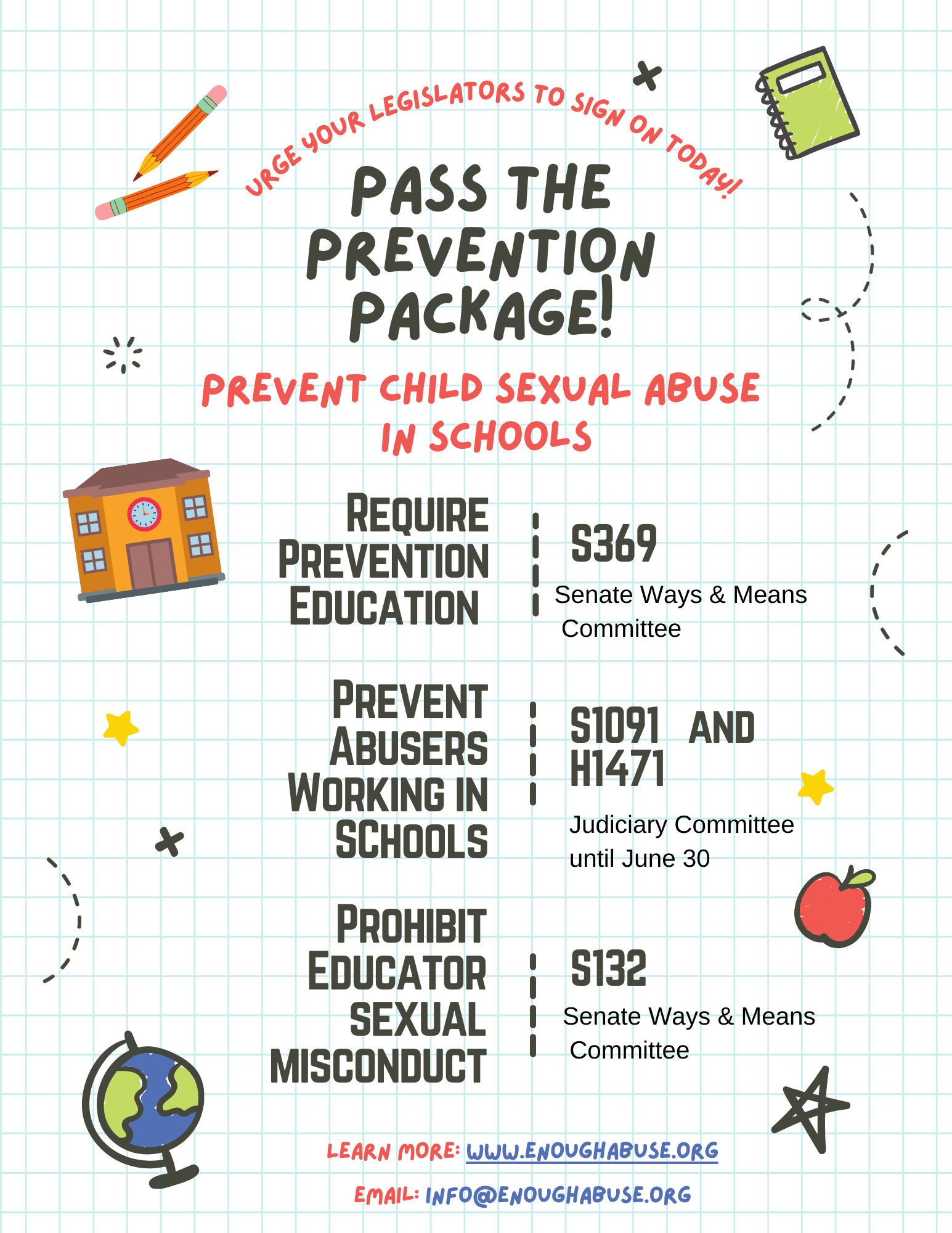 S369 and H241 include the following key provisions:

According to the US Department of Education, 7% or 3.5 million American school children in Grades 8 -11, report having had unwanted direct sexual contact with someone in their school – usually a teacher or coach - during some point in their school career. Substitute teachers, bus drivers, teacher aides, security personnel, principals and counselors were among other school employees identified. Overall, the DOE report found that when non-touching sexual offenses were included, e.g. sending illicit texts or photos, making suggestive comments, etc., the percentage of school children exposed to contact and/or non-contact sexual misconduct rose to 10 or 4.5 million students.[1] That means that as many as one million Massachusetts school children may be vulnerable to this type of harm.

Despite these alarming numbers, two-thirds of teachers don’t receive training in preventing, recognizing, or responding to child sexual abuse, either in their college coursework, or as part of their professional development.[2] Not surprisingly, a study of primary school teachers found the most common reasons for not reporting suspected child sexual abuse was their lack of confidence in their ability to identify it, and to respond appropriately to suspicions.[3]

Another study of teachers’ attitudes toward and knowledge of child maltreatment found that 87% said they were unaware of the signs of child sexual abuse and would not report sexual abuse to school authorities, even if a child disclosed to them.[4]

This unwillingness to report is likely influenced by the expressed fears and biases of school personnel documented by MassKids as part of its in-person training of school personnel. These include: disbelief that a colleague could be engaged in sexual misconduct, dismissal of rumors about misconduct, concerns that reporting would reflect badly on the school, fears of not being supported by other colleagues and administration if they report, fears of being sued if allegations were proven false, abdicating to others the legal responsibility to report a suspected case; or misinformation that children likely lie about being sexually abused.[5]

As regards the education of school personnel about child sexual abuse, a 2014 report of the Government Accountability Office (GAO) indicated that while 18 states at that time required school districts to provide “awareness and prevention training on child sexual abuse,” almost all the training was focused on mandated reporting of cases after-the-fact rather than on proactive actions to prevent it in the first place.  Furthermore, 15 of the 18 limited the training for superintendents, administrators, counselors, psychologists, and teachers, with less than half requiring it for Title IX coordinators, cafeteria and janitorial personnel and bus drivers. Only 10 required coaches to take the training and only one required it for school volunteers and tutors.[6]

Schools are charged with the fundamental dual responsibility of educating children and ensuring a safe and nurturing environment that allows them to learn.  Without adequate training, educators may not understand the impact childhood trauma, including child sexual abuse, can have on a child’s learning and academic success. In one study, the cognitive abilities, memory scores and academic achievement of sexually abused children were lower than those of their non-abused peers.  For example, 48% reported below average grades, 39% displayed academic difficulties, 24% repeated a grade, 15% were enrolled in remedial classes, and a higher percentage failed to graduate.[7]

Clearly, educating adults, students and their parents about child sexual abuse prevention through training opportunities in schools and youth organizations, is a key strategy to end the silence, shame, and denial that has undermined the safety and well-being of our children for so long.

In the 2015/2016 Legislative Session, after a successful multi-year effort to reform criminal and civil Statute of Limitations (SOL) statutes on child sexual abuse, MassKids and survivors turned their attention to passing a set of prevention-focused bills, including, S316 requiring CSA education in schools and YSOs, S.247 requiring standardized screening of school and YSO personnel, and S868/S869 eliminating age of consent protections for school employees engaged in sexual misconduct with students 16-18 years of age.

In the 2017/18 Session, Omnibus bill S295 was introduced combining these and other provisions, but was held pending broader support from teachers’ unions and other organizations.

In the 2019/2020 Session, an amended S2579 was passed favorably by the Committee on Education and was headed to the Senate Floor for an anticipated unanimous vote, however, was stalled due to the pandemic.

In the current 2021/22 Session, S369 and H241 have been introduced to require public and private schools and youth-serving organizations to educate all employees and all students about child sexual abuse prevention, and require them to adopt a code of conduct detailing prohibited boundary-violating behaviors. Advocates are optimistic about passage this Session.

In 2010, the U.S. Government Accountability Office (GAO) conducted a cases study of public and private schools to explore the factors relating to the hiring or retaining of individuals with histories of previous sexual misconduct.[8]  Of the 15 cases examined, eleven involved people who previously had targeted children. In at least six cases, the GAO found offenders used their new positions to abuse more children.

The following factors were found to have contributed to their hiring or retention by the schools: 1.) school officials allowed teachers who had engaged in sexual misconduct toward students to resign rather than face disciplinary action, often providing subsequent employers with positive references; 2.) schools did not perform pre-employment criminal history checks; 3.) even if schools did perform these checks, they may have been inadequate in that they were not national, fingerprint-based, or recurring; and 4.) schools failed to inquire into troubling information regarding criminal histories on employment applications.

In 2017, the federal “Every Student Succeeds Act” (ESSA) responded to the stated concerns of Congress about State and Local Education Agencies not adequately addressing the sexual abuse of students which it indicated had increased fifteen fold since a decade ago.[9] Under SEC. 8546. Prohibition on Aiding and Abetting Sexual Abuse, the U.S. Department of Education now requires- a state, state education department or school that receives Federal funds under the Act to establish laws, regulations, or policies that prohibit any school or its employees from assisting an employee in obtaining a new job, if the individual or agency knows, or has probable cause to believe, that such school employee engaged in sexual misconduct regarding a minor or student.

Passage of this legislation would meet our state’s obligation to meet the ESSA requirements and would further build the capacity of schools to protect students from the devastating consequences of child sexual abuse and its impact on families and our communities.

In the 2015-2016 Legislative Session, Massachusetts proposed a bill to prohibit the allowing or encouraging of school employees engaged in sexual misconduct to resign in lieu of an internal investigation, outside investigation or legal action, as well as providing a positive reference to assist the employee secure a job in another school. This practice has been labeled “passing the trash” by other states.  Bills were proposed in both the House (H.1374) and Senate (S.247).  This practice had been all too familiar as Massachusetts was the first to document the actions of Catholic Church officials who, when faced with pedophile priests in their midst, routinely sent them to unsuspecting parishes where they continued to abuse other children.

In 2017 S295, the bill was introduced as part of a broader Comprehensive Child Sexual Abuse Prevention Act which included specific provisions on Sexual Abuse Prevention Hiring Requirements, including prohibitions on confidentiality agreements aimed at suppressing information about sexual misconduct or abuse, and liability protections for schools sharing information about an employee’s sexual misconduct with another school. During this session, support for the bill was secured from numerous public and private groups, including teachers’ associations. The bill, however, failed to pass before the end of the session.

In January 2020, S295 provisions were divided into two bills, including one mandating certain hiring practices to prevent child sexual abuse. Due to the pandemic, action on both bills was stalled. In 2021, to support passage, mirror bills in the Senate (S1091) and House (H1471) were introduced.

Preventing Educator Sexual Misconduct and Abuse of Children and Youth

S132 and H1620 address anyone over the age of 21 employed or contracted by a school, youth organization, state department serving children, etc. who engages in sexual relations with a student under the age of 19 or with a person under age 22 who has special needs. Such an individual may not claim age of consent as a defense in a civil action (S132 and H1620) or criminal charge (H1620). H1620 includes imprisonment, fines or both, requires that the person register as a sex offender and, if a teacher or other certified professional, that their license be revoked.

S1092 criminalizes sexual misconduct conducted by any person in a position of trust, authority or supervision over a child. Over 20 types of such individuals are listed. A child under the age of 18 would be deemed incapable of consenting to any sexual relations with such an individual, closing a loophole that has provided cover for sexual abusers who engage in non-sexual grooming behaviors with a child under 16, and then escalate to sexual offenses after the child reaches 16 - the age of consent. This means that a defendant in a criminal action under these provisions could no longer use age of consent as a defense. The bill includes specific punishments for sexual assault and battery against a child under 14 years of age, youth between 14 and 18 years, and youth over the age of consent from 16-18.

Actions YOU Can Take to Prevent Child Sexual Abuse

[8]  K-12 Education: Selected Cases of Public and Private Schools That Hired or Retained Individuals with Histories of Sexual Misconduct. Report to the Chairman, Committee on Education and Labor, House of Representatives. Government Accountability Office, 2010. GAO-11-200 https://www.gao.gov/assets/320/313251.pdf